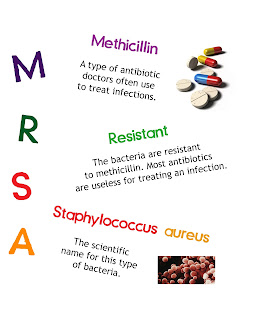 Staph bacteria are normally found on the skin or in the nose of about one-third of the population. If you have staph on your skin or in your nose but aren’t sick, you are said to be “colonized” but not infected with MRSA. Healthy people can be colonized with MRSA and have no ill effects, however, they can pass the germ to others.
Staph bacteria are generally harmless unless they enter the body through a cut or other wound, and even then they often cause only minor skin problems in healthy people. But in older adults and people who are ill or have weakened immune systems, ordinary staph infections can cause serious illness called methicillin-resistant Staphylococcus aureus or MRSA. Though most MRSA infections aren’t serious, some can be life-threatening. Many public health experts are alarmed by the spread of tough strains of MRSA. Less often, staph can cause serious problems like infected wounds or pneumonia.
Staph can usually be treated with antibiotics. But over the decades, some strains of staph — like MRSA — have become resistant to antibiotics that once destroyed it. MRSA was first discovered in 1961. It’s now resistant to methicillin, amoxicillin, penicillin, oxacillin, and many other antibiotics. Because it’s hard to treat, MRSA is sometimes called a “super bug”.
MRSA is spread by contact. So you could get MRSA by touching another person who has it on the skin. Or you could get it by touching objects that have the bacteria on them. MRSA is carried, or “colonized,” by about 1% of the population, although most of them aren’t infected.
MRSA infections are common among people who have weak immune systems and are in hospitals, nursing homes, and other heath care centers. Infections can appear around surgical wounds or invasive devices, like catheters or implanted feeding tubes. Rates of infection in hospitals, especially intensive care units, are rising throughout the world. In hospitals, MRSA causes more than 60% of staph infections.
Signs and Symptoms
The symptoms of MRSA depend on where you’re infected. Most often, it causes mild infections on the skin, causing sores or boils, or resembling spider bites. These can quickly turn into deep, painful abscesses that require surgical draining. Sometimes the bacteria remain confined to the skin. But they can also burrow deep into the body, causing potentially life- threatening infections in bones, joints, surgical wounds, the bloodstream, urinary tract, heart valves and lungs.
Stop unnecessary use of antibiotics.
· Like other superbugs, MRSA is the result of decades of excessive and unnecessary antibiotic use. For years, antibiotics have been prescribed for colds, flu and other viral infections that don’t respond to these drugs, as well as for simple bacterial infections that normally clear on their own.
· Prescription drugs aren’t the only source of antibiotics. In the , antibiotics can be found in beef cattle, pigs and chickens. The same antibiotics then find their way into municipal water systems when the runoff from feedlots contaminates streams and groundwater. Routine feeding of antibiotics to animals is banned in the European Union and many other industrialized countries. Antibiotics given in the proper doses to animals who are sick don’t appear to produce resistant bacteria.
Practice good hygiene.
· In or out of the hospital, careful hand washing remains your best defense against germs. Scrub hands briskly for at least 15 seconds, then dry them with a disposable towel and use another towel to turn off the faucet. Carry a small bottle of hand sanitizer containing at least 62 percent alcohol for times when you don’t have access to soap and water.
· Showering immediately after participating in exercise, especially after using exercise equipment.
Avoid sharing personal items.
· Do not share towels, razors, sheets, clothing, or athletic equipment that come into contact with your bare skin; and using a barrier (e.g., clothing or a towel) between your skin and shared equipment such as weight-training benches. MRSA spreads on contaminated objects as well as through direct contact.
Keep wounds covered.
· Keep cuts and abrasions clean and covered with sterile, dry bandages until they heal. The pus from infected sores often contains MRSA, and keeping wounds covered will help keep the bacteria from spreading.
Sanitize linens. 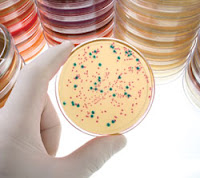 · If you have a cut or sore, wash towels and bed linens in hot water with added bleach and dry them in a hot dryer. Wash gym and athletic clothes after each wearing.
Get tested
· If you have a skin infection that requires treatment, ask your doctor if you should be tested for MRSA. Many doctors prescribe drugs that aren’t effective against antibiotic-resistant staph, which delays treatment and creates more resistant germs.
Olive leaf Extract
· Olive leaf Extract is a natural anti-biotic that has been used in hospitals in to overcome MRSA with good success rates. Olive leaf extract has been used as a natural antibiotic for thousands of years; when the active components were isolated in 1969, an upsurge of research has resulted in dramatic discoveries. Research at the Upjohn Company, published by the American Society for Microbiology, found that the active components in Olive Leaf – elenol acid and calcium elenolate, inhibited the growth of every virus, bacteria, fungi and protozoa they were tested against.
Take a Probiotic
Choose a Probiotic that has both L’s and B strains and will support the Intestinal Flora.
Oregano is the oil of choice for acute MRSA.
· Add 3 drops Oregano oil to a capsule and fill with carrier oil.
· Take 2x daily, morning and night.
· Can also use directly on infection, by mixing 1-2 drops Oregano in 1-2 Tbl. Olive oil.
· Remember to use Oregano 7-10 days on and then take a few days off, as the high Carvacol content in oregano can cause liver toxicity build up.
· We suggest to take a liver cleanse while using Oregano.
§ 1 drop Lemon
§ 1 drop Peppermint
§ 1 tsp. Fresh Lemon juice.
§ Mix together and take upon rising each morning.
Acute MRSA Recipe #2:
Add to Capsules the following Essential Oils and then fill with carrier oil:
· 2 drops Oregano
· 2 drops Thyme
· 2 drops Rosemary
Take with each meal for 3-5 days or until infection clears.
Can also use the mixture directly on infection. Add 3 Tbl. Olive oil to essential Oil mixture before applying.
For minor MRSA in adults and for use with children.
· Mix together 25 drops Lavender
· 20 drops Tea Tree
· 20 drops Rosemary
· 10 drops Sandalwood
· Apply to affected area (if to hot add carrier oil).
· Put in shampoo or lotion (without fragrance)
· Add 10 drops of the mixture in ½ cup Epsom salts in warm water to wash with.
· Diffuse.
The blend per la Immunity can be very affective:
· Lick trick with Immunity blend 3 times a day.
· Add 1-2 drops to Applesauce or poke in Apples.
· Brush teeth with it. (Careful to keep off outside of mouth, as it is a hot blend)
To help reduce MRSA bacteria, while in the hospital or at home:
· Add 10 drops Lemon oil to 16oz water in a Spray bottle and mist the air and surfaces.
· Use Bacteria buster recipe:
10 drops Lemon
8 drops Eucalyptus
5 drops Rosemary
3 drops Lemongrass

Add all to water, shake and spray. Use to wipe down counters, cabinets, sinks, tubs, toilets, doorknobs, fixtures, etc.. to protect from bacteria spreading.